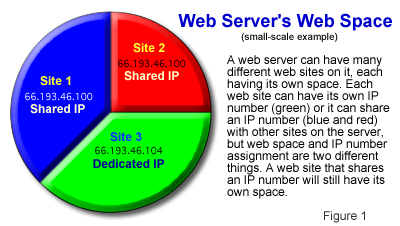 You may know a web site by its name (a domain name like WAASI.net), but names aren't the real way different web servers and web sites are identified when communicating across the Internet with other sites, computers, and devices. When you use a browser to surf to a name, your browser has to first resolve and obtain the IP address for the domain name that you are requesting. The name is translated into the IP address to which the domain name is assigned. This translation is done by a Domain Name Server (DNS), which is a computer that has lookup tables for domain names and their assigned IP addresses. Your request for the domain name is found in the DNS table and the name is converted to its IP address, then the corresponding web server (where the IP number is assigned) grabs your request and translates the IP address back to the domain name and displays the correct web site to you. The name-to-IP address conversion is quick and transparent to many people, however, traffic across the Internet between web servers, computers, and other devices is reported by IP addresses, not by domain names, so the ability to distinguish between web sites by their IP address becomes important.

Knowing that other web servers, computers, and devices on the Internet see a web site by its IP address, now let me give you an example of how a web site appears to them (the outside world). Think of the web server as an apartment building. Each apartment in the building has its own address (apartment number) which uniquely identifies it from other apartments in the building. When a web site on a shared web server is assigned its own IP address (a dedicated IP number), the web site is uniquely identified to the outside world from other sites on the same server. On the other hand, when a web site is assigned an IP address that is shared with other sites, in comparison, to the outside world it would be like you sharing the same apartment with others. It is more difficult to distinguish between your site and others.

A dedicated IP address separates your web site from other sites on the same web server and, unlike in a shared IP environment, you are not affected by what other Web site owners do. For example, if one site owner on the shared server violates rules, such as using an email address extraction program, a hacking tool, or attempts a Denial of Service (DoS) attack on another provider’s server, or in some cases, unintentionally runs an out-of-control search engine or news spider script, then the IP address of the offending web site will get blocked by other service providers or by a backbone provider, in a worse case scenario. The IP address gets blocked because, as noted earlier, communication between web servers and other devices is reported by the IP address not by the domain name. If other sites on the server share the same IP address as the offending site then all sites on the IP address will be blocked until the cause of the problem is corrected, as in the case of an out-of-control spider, or until the culprit is found. To the outside world, a dedicated IP address separates your site from other sites on the same server and your site will not be blocked.

Unfortunately, a dedicated IP address alone might not protect you against spam offenders. Outgoing email could be handled in a different way. The mail could be set up so the server’s main IP address, not your web site’s IP address, reports outgoing mail to the outside world. In this case, if another site owner on the same mail server as yours sends spam messages from his/her domain name, then the offending IP address will be reported as the server’s IP. Outgoing mail from all sites on the server can be affected. Strict policies, responsible web site owners, and constant web server management by qualified staff help to minimize this problem and protect you against spam offenders.

Was this answer helpful?

What is the difference between a static ip and a dedicated ip address? All devices connected to the Internet are identified by an IP address. "IP" stands for Internet... Unlimited Services... Is That Possible? We have all seen these ads for web hosting services: unlimited drive space, unlimited bandwidth,... The Dirty Little Hosting Secret Most people think that all hosting is pretty much the same and so they try to find the lowest... Is your password secure? We have all heard about the great feats of Harry Houdini, the magician and escape artist. He... How many domain names do you need? There is a debate going on about how many domain names a company needs in order to be successful...
« Back